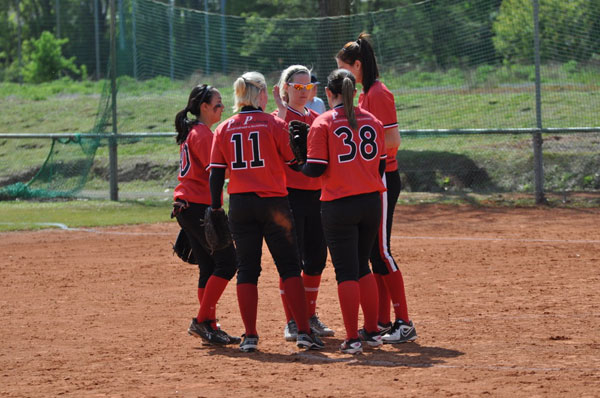 Hamburg, Deutschland, May, 8, 2016 – This weekend the Tornados left the Hamburg field feeling confident about their results and team chemistry, taking three games out of the four played against the Hamburg Knights. The team played two double headers, capturing two wins on Saturday and coming back on Sunday to lose in a nail biter and answer back with a strong win to end the weekend on a good note.
The Tornados came out looking strong in the first game. Mona Hörner led the team with 6 strike outs and getting key outs in crucial situations with runners in scoring position. Hörner and her defense shut down the Knight’s offense to only one run in the third inning. On offense, Amira El-Ayoubi came up big with two RBIs, trailing Mimi Kemmer’s big hit to score.

The Tornados came back to play on Sunday at 12:00. Michele Cewe, the starting pitcher for the Tornados, pitched well despite a few errors that scored three runs. The Tornado’s started the game off strong, scoring two runs in the first inning and one run in the fifth. Unfortunately, the runs fell short and in the seventh inning, the offense couldn’t push a run across. In the bottom of the seventh, the Knights were able to hit a hard ground ball to short stop to score in a close play at the plate.
After a hard loss, the Tornados came back with a determined attitude the next game. The second game mirrored the second game from the Tornados the day before. The Knight’s pitching staff couldn’t hold the Tornados offense, as they scored in every inning, totaling 10 hits and 11 runs. The Tornado’s defense was tightly knit, allowing only a few base runners and no runs to score.

The Tornados walked away from the long four-game weekend, feeling good about how well they came together to fight in both games of each series on Saturday and Sunday. Nina Wunn says, ‘I think we played better on Sunday both games and finished very strong this weekend. We included the young players and they did a good job.’ The Tornados record is now 6-2 for the season, and they look forward to the next games in two weeks against the Wesseling Vermins.